The End of the Mid-Budget Movie 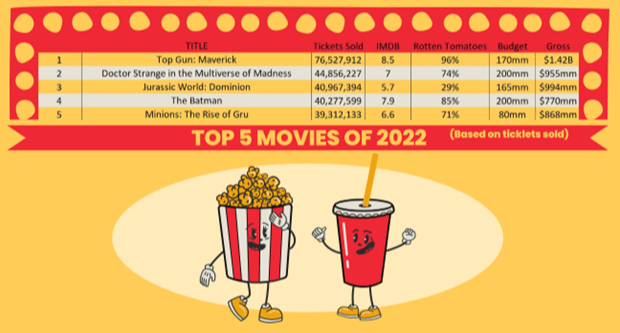 The End of the Mid-Budget Movie

The modern movie era is defined by big budget spectacles with attention-grabbing special effects and unmatched picture quality. Though DVD sales have declined in recent years, big budget films have shown true staying power in the streaming space. This begs the question, are the mid-budget projects synonymous with 80s and 90s cult-film culture being pushed aside? It seems that this could be the case, especially considering the astronomical returns studios are enjoying from producing big budget films. To illustrate this fact, we will discuss the profits from some of the biggest summer blockbusters and give our personal reviews of the films, as well as possible reasons mid-budget films are taking a back seat.

There is no question that “Top Gun: Maverick” was the movie of the summer. Some might even call it the movie of 2022. With a Rotten Tomatoes audience score of 99%, the film has taken viewers by storm. As of mid-August, the film had grossed $1.4B, and that’s without a major release in China. It cost $170M to make the film, which makes for a 723% return on investment. Not too shabby.

I must admit, when I heard a Top Gun sequel was coming out, I thought it was a horrible idea. Sequels seldom live up to their predecessor, and the original Top Gun is a classic. Despite this, I went to see the film. Per usual, I purchased an extra-large popcorn (with butter) and an extra-large cherry coke (free refills). As the movie began, I was immediately grabbed by the theme music and powerful sounds of the fighter jets. It was a great Top Gun experience, and I certainly recommend seeing it in theaters.

Another top-grossing movie of the spring/summer release season was the highly anticipated “The Batman,” directed by Matthew Reeves. Raking in almost $771 million at the box office, The Batman is tied for the highest budget at $200 million. Second only to Top Gun, The Batman had one of the highest IMDB ratings at 7.9/10. It also had the second highest audience score on Rotten Tomatoes, receiving 85% positive impressions critics.

With a star-studded cast and iconic imagery, it is no surprise that The Batman ranks second overall. The heavily praised Batmobile scene as well as several other true-to-character scenes add to the appeal for long-time fans. The cinematography is also brilliant, utilizing almost entirely visual effects in an era where superhero movies have been engulfed by a wave of CGI. The one drawback of the film is its length, though a dedicated fan with three hours to spare will love this movie.

Considering the popularity of CGI, using actual jets during filming, and huge names on every block buster movie-credit, it is no surprise that mid-budget movies are fading away. Before we go any further, let's discuss what a mid-budget movie is. A movie with a budget of $5 million to $60 million is considered mid-budget. Toy Story came out in 1995 and had an estimated budget of $30 million. If we account for inflation, that would be about $58 million in today’s dollars. The pandemic accelerated the transition to movies with astronomical budgets, and four of the top five movies of the summer had a budget that surpassed $150,000,000!

Do not let these multimillion-dollar productions fool you. Just because it cost Warner Bros. hundreds of millions of dollars to make a two hour movie does not mean it will be your new favorite film. Take Jurassic World for example: it had a budget of $165 million and made a return of almost 600%, yet still only managed to get a 29% Rotten Tomatoes rating. The children’s movie Minions had the smallest budget of the top five, but still yielded an amazing return of 10X its investment while simultaneously appealing to the masses with a 71% Rotten Tomatoes rating.

Streaming services own the rights to show thousands of movies and most of them are mid-budget, or several years old. However, even streaming services have prioritized big-budget films, further tightening the space for lower budgets. Trying to make a mid-budget movie in a world that has massive investment return expectations means that the little guy often gets pushed directly to streaming. The next time you open Netflix or purchase a movie ticket ask yourself, “is it really worth half a billion dollars?”